Exercises Standing Calf Raise Machine: How To Use, Benefits and Muscles Worked
Thanks for subscribing!
July 20, 2020

Hollywood is responsible for millions of people’s dreams of getting ripped, but how do they do it? How realistic is it? Can you do it too?

First of all, we need to address the elephant in the room. A lot of what Hollywood pulls off is fake. There’s no magical diet, no set of supplements, and no exercise plan that will make you look like Gerard Butler in 300 or Hugh Jackman as Wolverine. In fact, if you look at these men outside of filming, even they don’t look like that.

So what’s going on?

They’re fit (to begin with). This is perhaps one of the biggest “secrets” about the Hollywood physique. These actors may look a little pudgy outside of filming, in their candid beach shots, but they’re still pretty fit. A body like this is physically fit, yes, but it’s not ripped, with the super-defined abs, the protruding veins, the glistening oils. 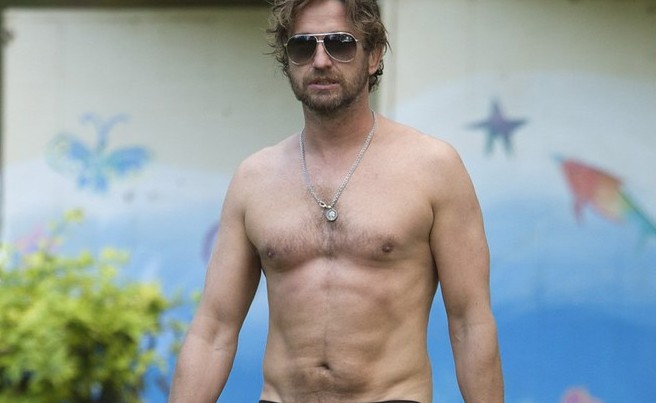 (Photo of Gerard Butler before a film, before a workout routine)

There are people like, say, Chris Pratt, who famously went from the pudgy and out of shape Andy Dwyer on Parks and Rec to the fit and shapely Peter Quill in Guardians of the Galaxy. He’s been fairly open about his weight loss for the roles, via his Instagram.  So what’s his secret?

One thing Chris doesn’t mention is supplements. While some celebrities no doubt use them, and we’ll talk about that later, they aren’t strictly necessary. Again, there’s no magic pill that will help get you ripped if you can’t handle the basics of diet and exercise.

They cut before filming. One of the biggest truths in Hollywood is that actors don’t just Look Like That all the time. They spend a few weeks or a month or so cutting their diets before filming. They might eat a normal 2,000-3,000 calorie diet each day, depending on their exercise levels, but when it comes time to film, they cut that down to 1,500 or less. The large loss of calories is a crash diet, and it’s not sustainable; it will eventually lead to malnutrition. 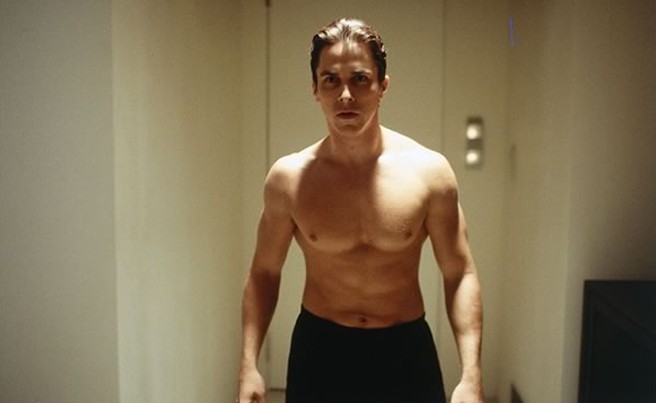 (Christian Bale at around 12% body fat)

Before filming, these actors cut down, reducing their body fat percentage to fractions of a percent. They maintain this for as long as they need to during filming, but back away from it when they’re no longer in front of the camera. After all, it’s not healthy to starve yourself.

They pump before scenes. Pumping is a state your muscles enter right when you start exercising (when you do it right). It fills the muscles with blood and makes them look bigger and feel stronger. It’s what makes veins stand out and makes muscles look larger than they normally are.

The “pump” is a temporary condition, and it doesn’t last very long – a matter of minutes, not days. Actors will pump up their muscles before their shirtless action scenes, to make their physique look larger and more impressive because that’s all they need; the appearance. They aren’t actually stronger or fitter there than they are normally, they just look like it.

They’re dangerously dehydrated. This may surprise you, but a lot of the weight you carry on your body isn’t actually fat or muscle, it’s water. Water weight is some of the easiest weight to both gain and lose.

In fact, losing water weight is how many actors get that extremely lean, extremely ripped appearance they get in films. Hugh Jackman is famous for going in 36-hour dehydration regimens prior to filming, and it’s how he gained that appearance in Wolverine and Les Miserables. 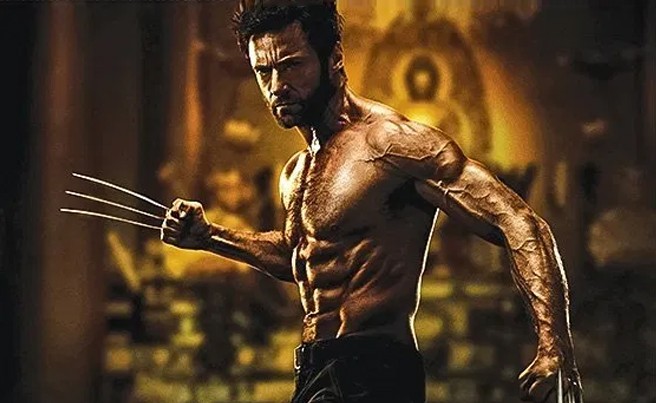 (Hugh Jackman, dehydrated and at about 8% body fat)

The dehydration plan involves spending days hyper-hydrating, drinking as much as three gallons of water a day. Then, about 36 hours before filming, he stops drinking entirely. A day and a half without water, and he’s dropped all of that surface weight, his muscles stand out, and he’s ready to film. Another day and a half, and the body begins to shut down and die. Water is important!

The problem, of course, is that your body still needs that water. Without it, the brain gets fuzzy, the organs start to shut down, and the body enters crisis mode. It’s unhealthy and dangerous, and absolutely shouldn’t be done at home.

It’s sometimes CGI. At the end of all of the above, it’s often still not enough to fit the unrealistic standards of superheroes and hyper-fit, hyper-masculine movie stars. There’s a good chance that at least some of the physique these actors have is computer-generated. These days, entire movie scenes that look otherwise entirely realistic are computer composite images. It’s extremely easy for a digital artist to make the abs pop just a little bit more, make the biceps just a little bit larger. It’s unattainable through normal means.

Some actors use supplements as part of a diet and exercise plan to get and stay fit for their roles. Others don’t. There are practically as many different supplement plans as there are actors, and trainers that work with actors. Everyone seems to have something different in mind, different proof that something works, and different recommendations.

One thing to note here is that there are generally two categories of supplements different actors take. The first category is the protein, amino acids, and other health supplements. These have a generally beneficial effect, but the effect can be somewhat minor compared to some of the stronger substances on the market.

The other category is steroids, and they are often illegal to possess or use. Some, though, are only illegal for competitions, and there’s nothing stopping actors from using them for filming. On top of that, we all know that the Hollywood elite actors aren’t subject to the same laws and rules as us mere mortals; they can get away with using and abusing substances that would put the rest of us in jail if it was discovered. 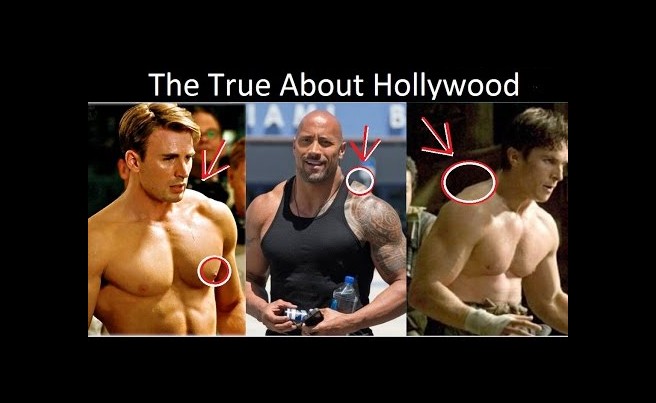 Some people analyze the muscle growth some of these actors showcase and assume there’s no way they get that growth without steroids. Certainly, under normal circumstances, such growth would be implausible at best. But, from what we know above, from the cut to the pump to a little CGI, it’s entirely possible for an actor to look a lot more ripped than they actually are.

Do actors use and abuse steroids? Absolutely also in Hollywood. Without one of them coming forward to tell all about what they’re doing, though, it’s impossible to say which actors are using them. Now and then, someone does, whether it’s a trainer leaking info or an actor coming out themselves.

In fact, steroids are so prevalant among actors in Hollywood that Ricky Gervais called them out on this during the 2020 Golden Globes:

“All the best actors have jumped to Netflix, HBO. And the actors who just do Hollywood movies now do fantasy-adventure nonsense. They wear masks and capes and really tight costumes. Their job isn’t acting anymore. It’s going to the gym twice a day and taking steroids, really. Have we got an award for most ripped junky? No point, we’d know who’d win that.” (from minute 4:00)

Obviously, we’re not going to necessarily recommend steroids to anybody; they can be dangerous to your health, they can be risky to use, and the illegal ones could put you in jail if you’re not careful.

So what kind of supplements are actors likely to be using to achieve their fitness goals? For the most part, their daily intake will primarily consist of amino acids and protein supplements. Here are some examples.

There are a lot of options out there, but for the most part, the healthier supplements are going to fall into the amino acids, proteins, and similar compounds categories. Beyond that, it’s all diet and hard work.

If you’re looking to mimic the Hollywood look, you can do it on your own, but you need to be dedicated to the task. No cheat days, no cheat meals, no cheat substances.

The first thing to do is evaluate where you are and what your goal is. If you’re thin and want to bulk up, you’ll have to do one thing, while if you’re obese and want to slim down, you have to do another. In general, though, it’s all coming down to two things: losing fat and building muscle. It’s just a matter of how much of each you do.

Losing fat is the most crucial part for most people. Almost all of us carry more body fat than we need, and if we’re looking to appear fit and jacked, we’ll need to lose that fat. 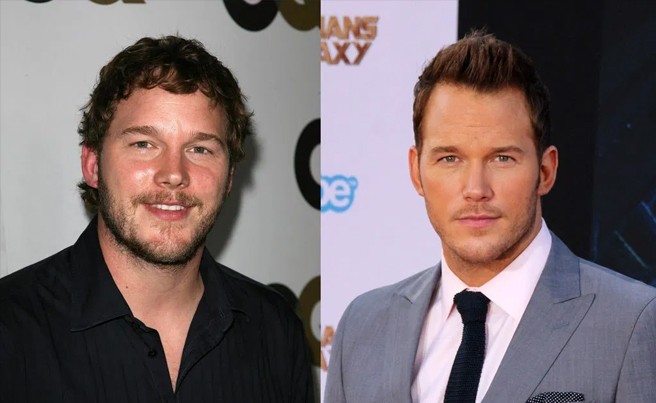 To lose fat, you need to maintain a caloric deficit. That means eating fewer calories and burning more calories. You can do this by adjusting your diet downward, by adjusting your exercise upward, or both. Usually, implementing both a workout routine and a diet change is going to yield the best results. If you’re completely sedentary and cut your calories, you’ll lose weight, but that weight might just as easily come from muscle as from fat.

Eat few or no carbs, eat more protein and vegetables, and make sure you’re getting enough nutrients from your diet to remain healthy. Make sure you’re drinking plenty of water – probably more than you think you need – to let your body process everything you’re taking in.

Take supplements if you want. Some of them, like creatine, have been scientifically proven to help build muscle. Others may have less of a benefit or haven’t been fully studied at all. Investigate any substance you’re thinking of taking, and balance the risks and rewards.

Gaining muscle is often harder than burning fat. Muscle growth requires the systematic teardown and healing of muscle fibers, which means exercise. When you exercise to lose fat, you can do anything from cardio to HIIT to weightlifting. When you want to build muscle, you need to actually work those specific muscles, which means a more dedicated bodybuilding plan.

There are hundreds of different workout plans out there. Plenty of them are celebrity-endorsed as well, though whether or not those celebrities personally used those routines is up for debate.

You may also want to consider plans like carb cycling, where you eat a high-carb diet on the days you work out to give your muscles fuel and eat a low-carb diet on rest days so you’re packing protein for the muscles to use to grow. Bulking and cutting is an eternal cycle that keeps you growing, then cutting down on the fat that accumulates along with the muscle, in repetition.

You also have to decide whether you want to look strong or be strong. Bodybuilders look strong by sculpting their muscles and cutting fat, but their endurance is notoriously low; it’s mostly muscles for show. Strongmen, by contrast, tend to look like barrels with limbs, unworried about the fat that covers their frame, but they’ll lift your car for you if you don’t have a jack.

In the end, you have a lot of flexibility if you want to attain the physique of a Hollywood actor, you just need to know your goal and work towards it.