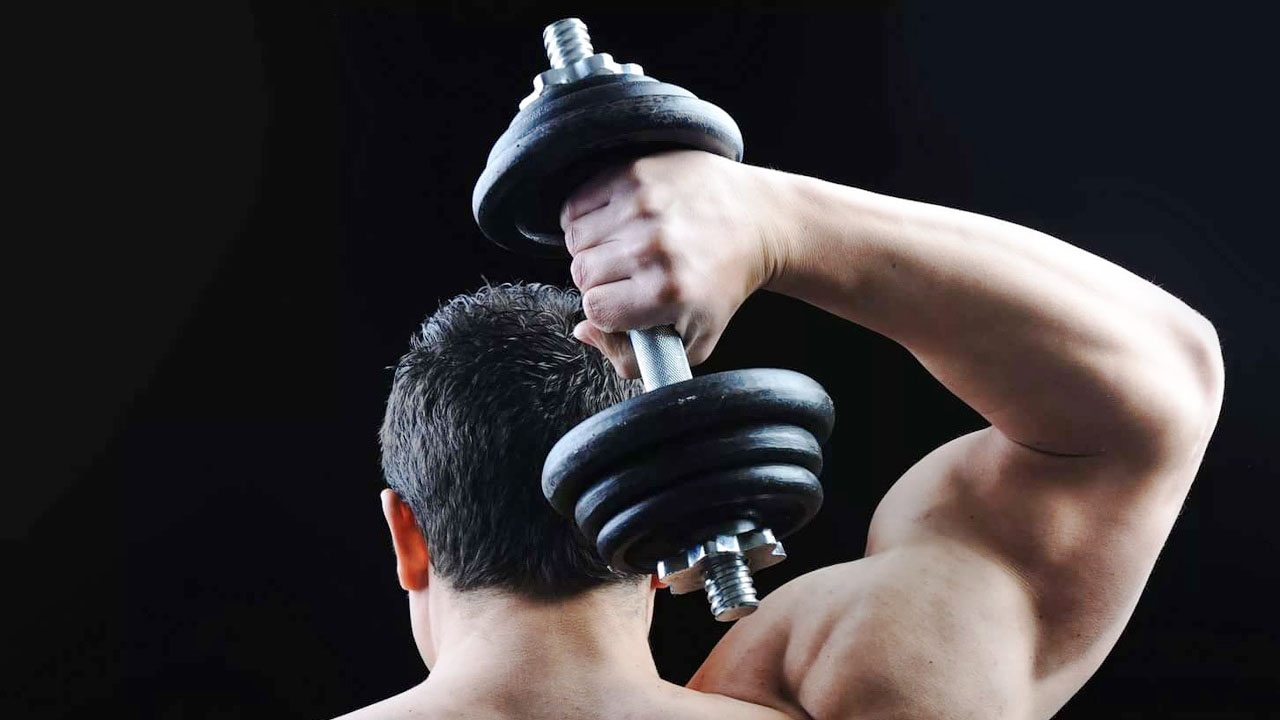 Exercises Standing Calf Raise Machine: How To Use, Benefits and Muscles Worked
Thanks for subscribing!
May 13, 2021

The Dumbbell French Press is an exercise in which you raise your arms, bend them at the elbows, bring your forearms behind your head, and then straighten them back up. This is one of the best isolated exercises for the triceps (the muscle that determines the shape of your arms). All three heads of the triceps (long, medial and lateral) extend the arm from the elbow, and the first one also helps to extend the shoulder.

When you raise your arm above your head, the triceps is in a stretched position, which increases the mechanical tension in the muscle during workouts and promotes an early increase in volume mass. In addition, the French Press has many variations: standing, sitting, and lying on a bench or on the floor, which you can do with one or two hands. You can do this exercise in any gym or even at home if you buy a pair of dumbbells.

How to Perform the Dumbbell French Press Exercise?

Lying on a Bench

The most popular option of the Dumbbell French Press is to perform the exercise lying on a horizontal bench. It allows you to bare more weight than when working from a standing or sitting position, and perfectly loads the triceps.

Move your hands to the side of your head, so that they are not perpendicular to the body, but at an angle. Due to this position, the torque in the elbow increases and the triceps receive more load.

From this point, bend your elbows smoothly and under control, lowering the dumbbells behind your head. You can lower them to the level of the bench or slightly lower (as far as the mobility of the joints allows).

Straighten your elbows, lifting the dumbbells to the starting position. Do not move your shoulders and do not lift your shoulder blades from the bench, as this will include other muscles to take some load and take away the load from the triceps.

Do not move your elbows during flexion or extension. They should stay ridged and roughly in the same place.

Lying on the Floor

This option is suitable for those who want to limit the range and do each repetition clearly in the same amplitude.

The rules are the same as in the bench press, only here, you lower the dumbbells each time until they touch the floor. 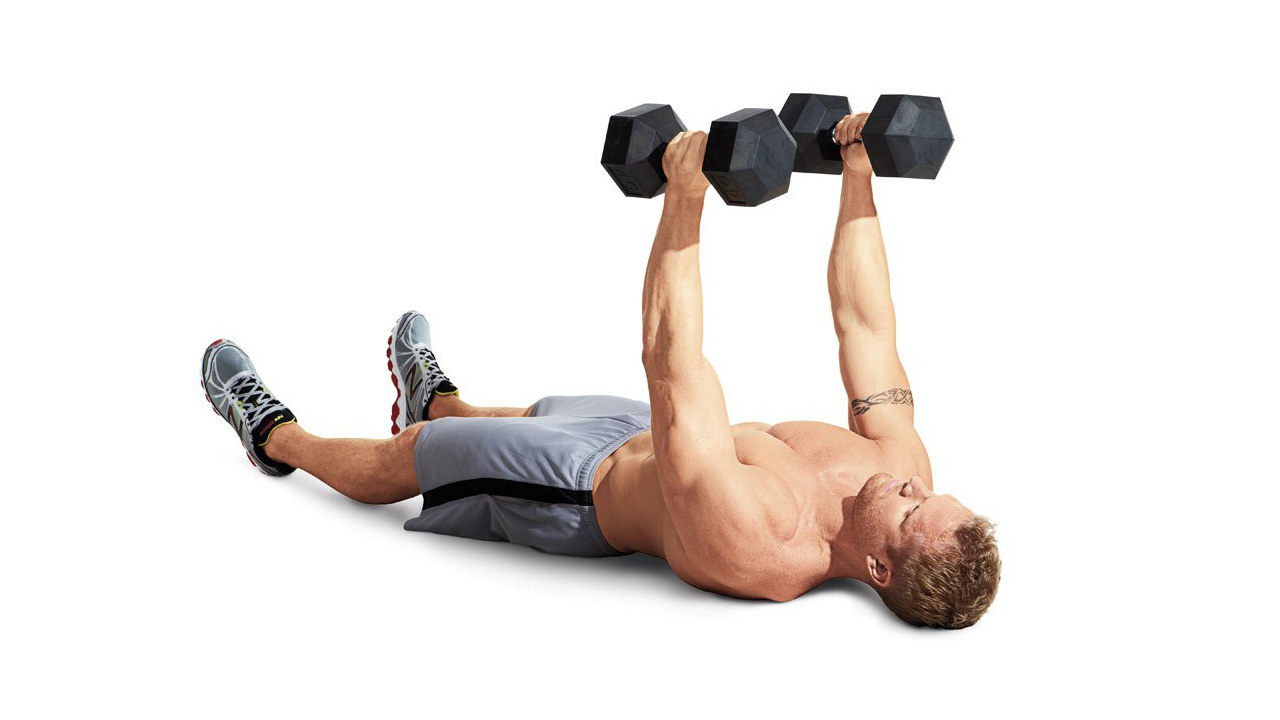 Seated or Standing with Two Dumbbells

In this version, the body is perpendicular to the floor, and the range of movement of the hands is greater than if you were doing the exercise lying down. On the one hand, you will take less weight, and on the other hand, you will load the muscles more strongly due to the greater amplitude.

Alternate this performance with the option on the bench to give the muscles an unusual load as this will help to stimulate growth.

Lift the dumbbells up at arm’s length. Lower your shoulder blades and lock your scapulars back. Lower the dumbbells behind the head to the end of the range, and then raise them back up. 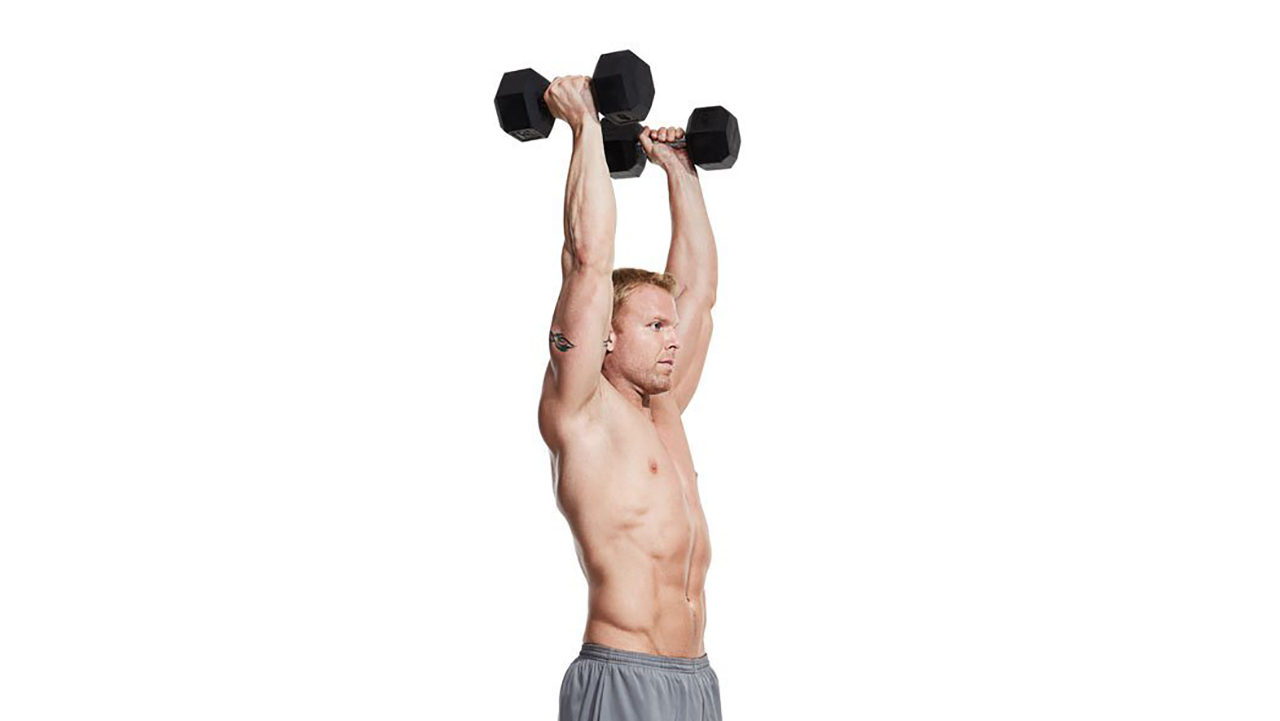 This version allows you to achieve the maximum range of motion and connect the body stabilizers to work more efficiently.

Keep your abs tight so that the body is rigid and stable, and do not bend your back. Hold the dumbbell behind your head and then straighten your arm to its full length. Try not to move your shoulder and make the movement bend only at the elbow. You can also use your free hand to hold the side of your abdomen to ensure you keep your posture correct and your body ridged. 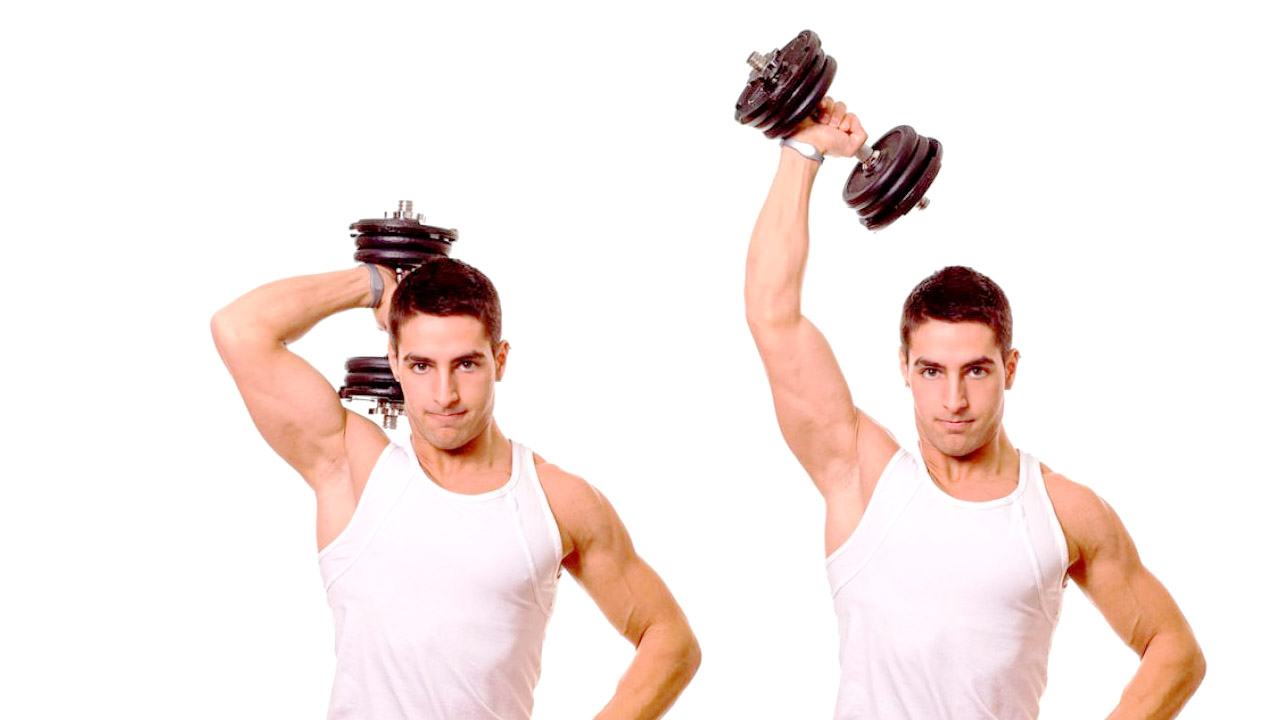 Here, the limbs are closer together, which slightly changes the load on the triceps. The variation is more comfortable than the same exercise with a barbell.

Grab the dumbbell by the weight plate with both hands, raise it above your head. Bend your elbows to begin outing load on the triceps and then straighten your elbows, again trying not to move your shoulders, as they should stay in a stable position. 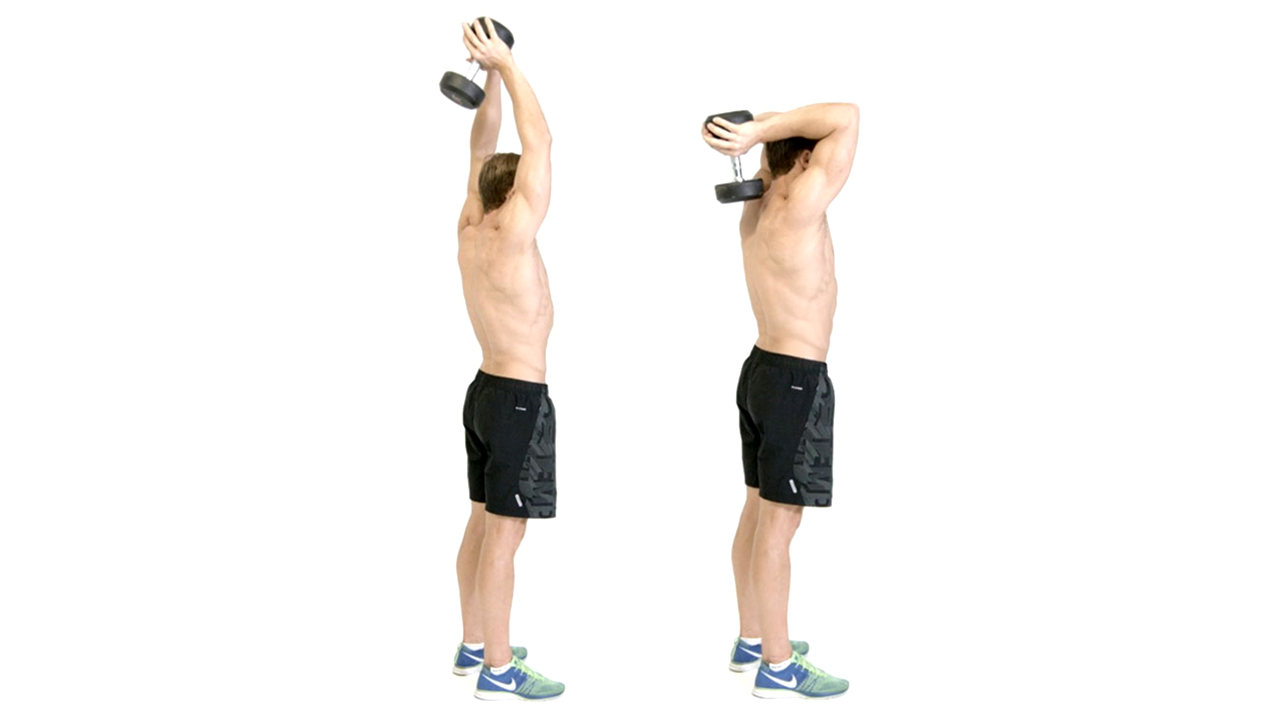 Seated on an Incline Bench

Many personal trainers and physical therapists recommend performing the Dumbbell French Press on an incline bench, because in this version you prevent the elbows from spreading to the sides and the movement becomes safer for the shoulders.

You can do this exercise with one or two dumbbells. The rules are the same: take your hands further behind your head, only bend at your elbows and do not move your shoulders in the process. 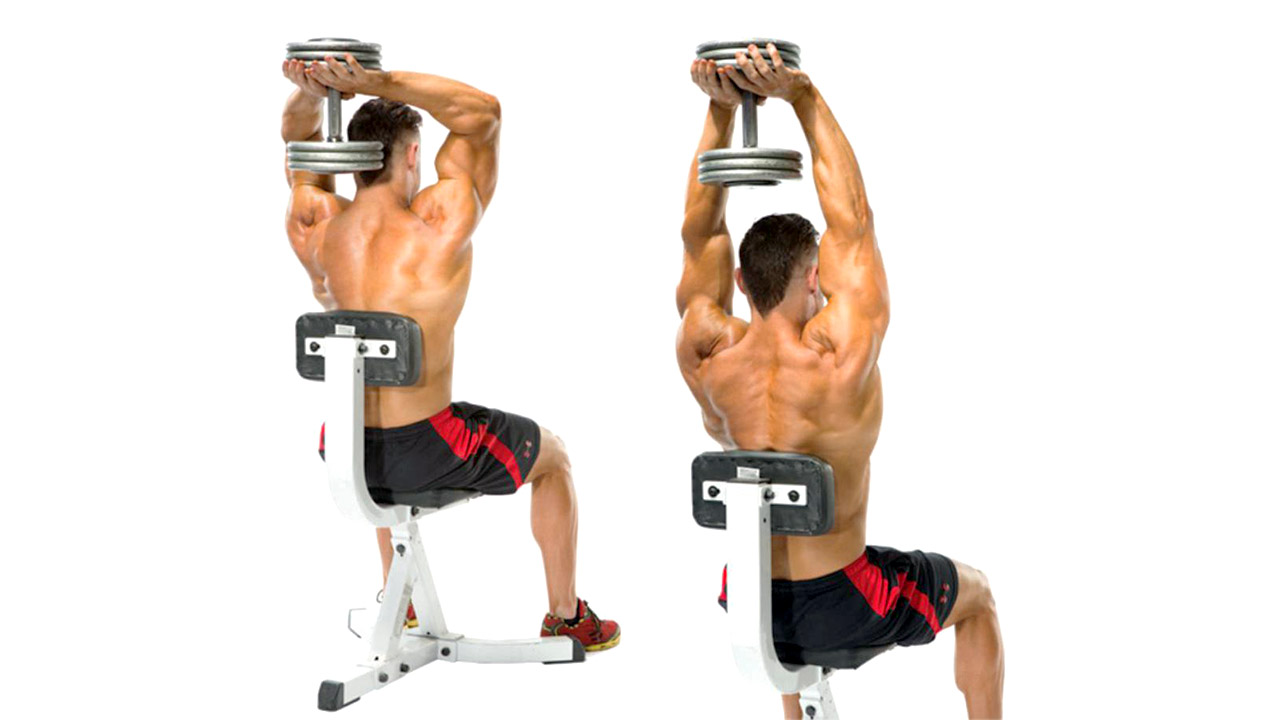 How Often to do Dumbbell French Press?

Choose the weight so that you can perform 8-10 repetitions in one set. The repetitions should be heavy, but not so heavy that you have to ruin the technique. If you start to move your shoulders or swing your whole body and loose the stable form, take a lighter dumbbell and try again until your positioning and technique is correct. Perfecting this technique is key for muscle progression, as if your technique is not correct, you are working more muscles than intended and this could lead to an injury.

Do Dumbbell French Press once a week, alternating with other triceps exercises: stretching your arms on a block or with dumbbells in a tilt, dips on the parallel bars. Also, periodically change the version of your exercises to load all of the muscle fibers as well.