Incline vs Decline vs Standard Pushups: What’s the Difference? 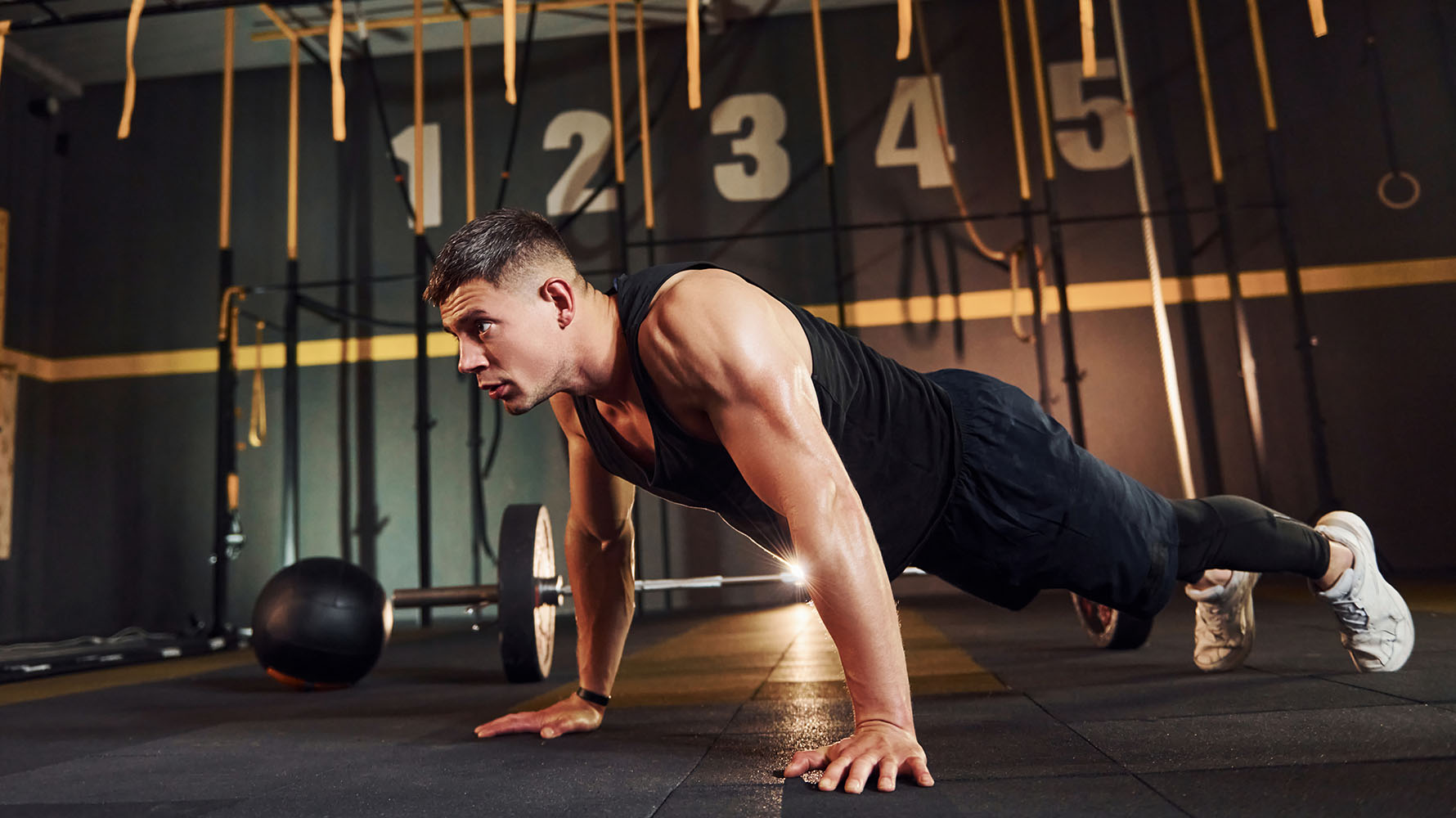 Incline vs Decline vs Standard Pushups: What’s the Difference?

Exercises Standing Calf Raise Machine: How To Use, Benefits and Muscles Worked
Thanks for subscribing!
November 17, 2020

The push-up is a simple exercise. Hold your body rigid and push yourself up with your arms. How many variations can there possibly be?

Well, surprisingly, a lot! It matters whether or not you use your knees or your toes as a fulcrum. It also matters how far apart your hands are, and whether they’re level with your shoulders or above your head. It additionally matters how hard you push yourself up, whether it’s a fast shove to work in a clap, or a slow press to draw out the tension.

It even matters whether you’re putting your hands or your feet on a raised platform, and that’s what we’re going to discuss today.

The standard, run of the mill push-up is a very common exercise. Seen everywhere from the elementary physical education class to the basic training yard to the gym, the push-up is easy to learn, but surprisingly difficult to master.

Push-ups are a very low investment exercise. You don’t need any special machines, weights, or tools to do them; just your body weight and a large enough flat surface to stretch out. They’re also quite complex in terms of the muscles they work.

There’s just one drawback to push-ups, which is the same drawback as a lot of bodyweight exercises; once you reach a point where you’re good at doing them and your body has gotten used to it, it gets harder and harder to make progress in strength training or muscle growth with the exercise. It’s very easy to find yourself in a plateau with push-ups. 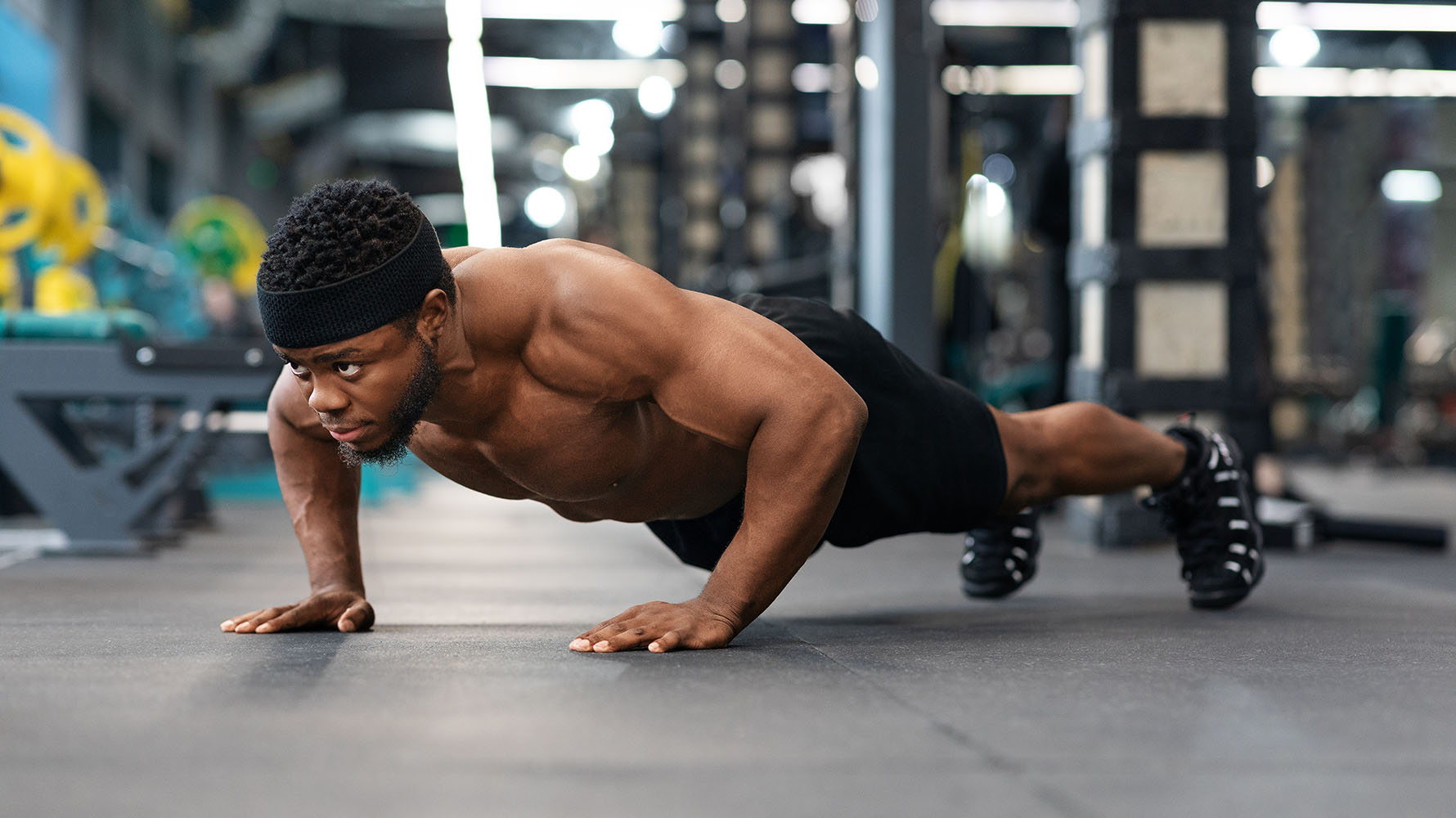 How to Adjust the Push-Up

If you’ve reached a plateau, if you fear reaching it, or if you just want to change up your routine, there are several different ways you can adjust the exercise.

First, make sure you’re maintaining proper form. Many people who do push-ups regularly tend to take shortcuts and slip out of position, gradually shifting from the proper form into improper form. This can result in an ineffective exercise and even injury in some cases.

To modify a push-up, consider alternative forms. For example, bringing your hands together in front of your chest removes some of your leverage and makes your push-up harder. You can also use more force to throw yourself up, clap, and land, if you have the strength to do so. Be careful that you don’t injure your wrists when attempting this maneuver. 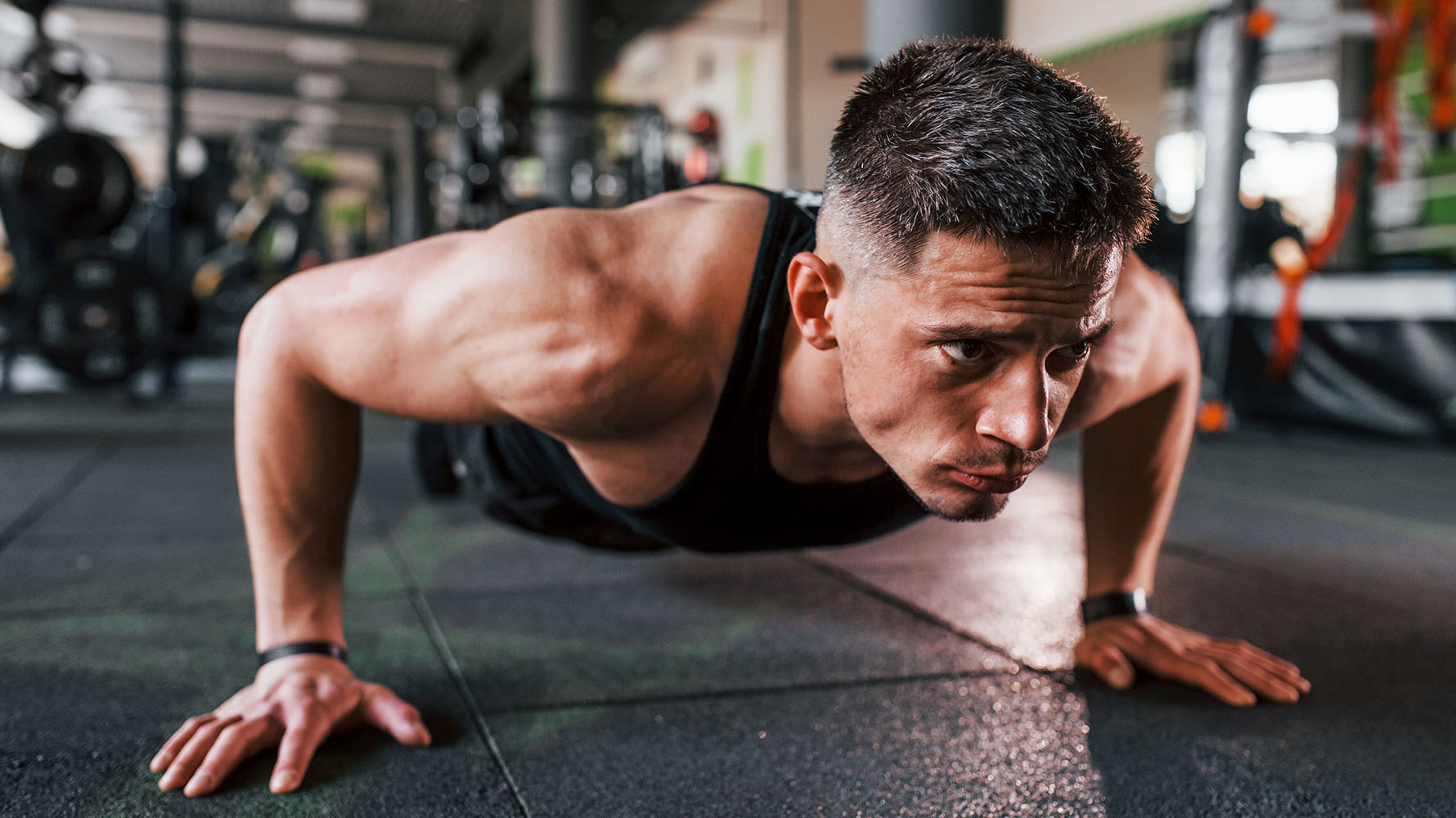 You can increase the weight you lift with a push-up by adding weights. It’s easy to screw up, though, because placing the weights wrong can restrict your range of motion, put pressure on joints which can aggravate them, or overextend your muscles leading to injury. It’s important to position the weights properly.

Two common modifications to the push-up are incline and decline push-ups.

All About Incline Push-Ups

An incline push-up is a simple variation to the starting position of a standard push-up. Rather than performing your push-up with your hands and feet flat on the floor, you raise the position of your hands. You are at an inclined angle from foot to head. 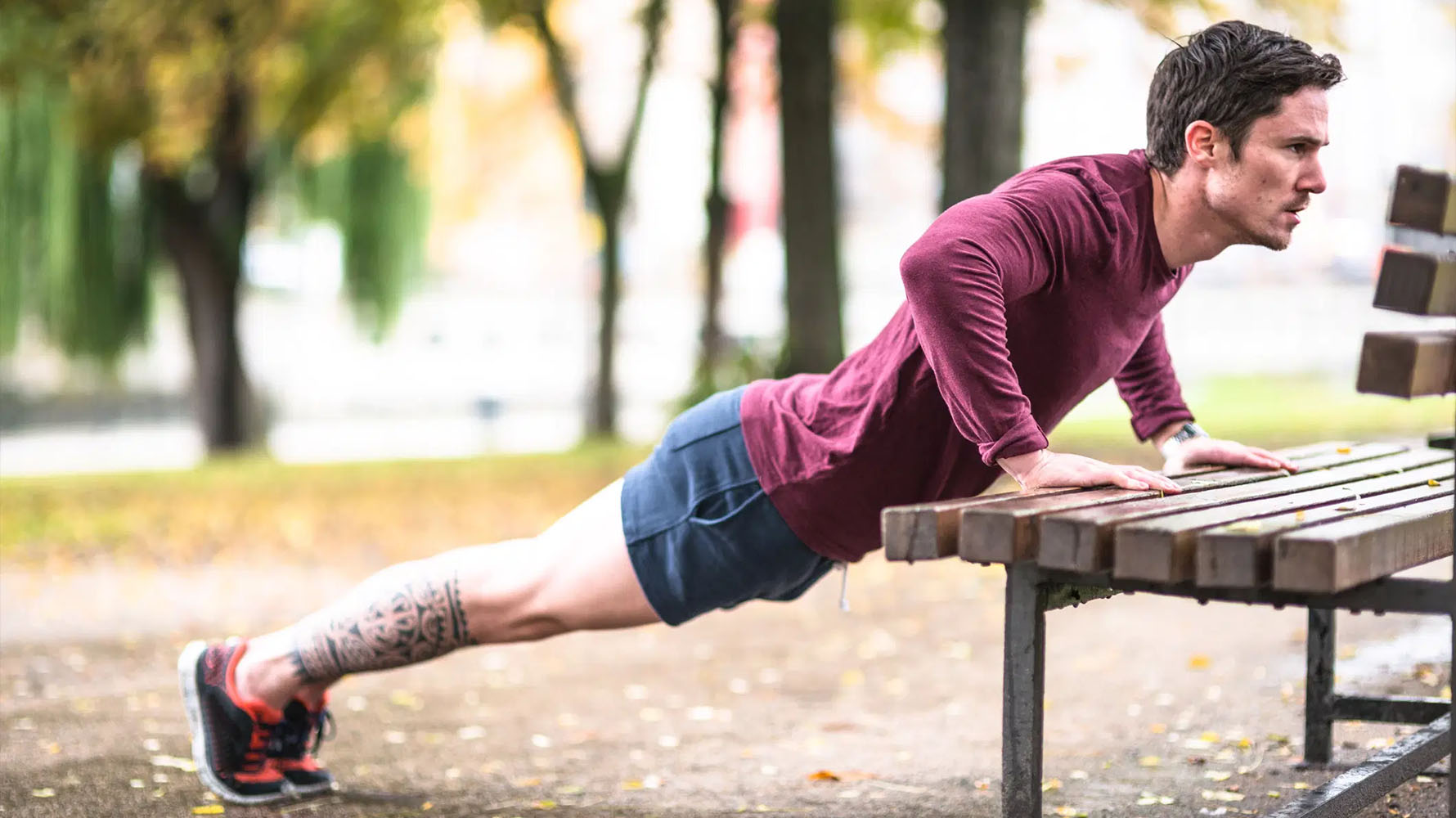 Incline push-ups change the muscles used to perform the exercise in a subtle but important way. You still need to focus on engaging your core to keep a straight body position, but it’s harder to do with an angle around 15-30 degrees off the ground. The pushing motion also works more of your chest and less of your shoulders on an incline push-up.

To perform an incline push-up, you need some kind of stable, slightly-elevated surface. Exercise boxes are common, but you can also use retaining walls, stacks of stable weights, or a bench. You’re looking for something that’s around 12-20″ tall, to give yourself an inclined angle that isn’t too steep. You should still be pressing against vertical gravity, not against a wall.

Make sure whatever objects and surfaces you’re using will not slip and slide away. You risk injury if your box slides away mid-push-up. Also, make sure it’s wide enough that your hands can be a full shoulder-width apart, for the best form.

To perform an incline push-up, take up the same position as a normal push-up, except with your hands on the edge of the box you’re using. Your lower state should be an angle, with your toes on the ground, your hands on the edge of the box, level with your shoulders, and shoulder-width apart. If you’re too close to the box, lowering down brings your hands too low and forces your torso to flex. If you’re too far, you’re pushing from above your head, and you’ll lack the leverage necessary to adequately perform the push-up.

Modifying this exercise is the same as normal push-ups, with one additional range of motion. Using your knees instead of your toes makes the push-up easier. Bringing your hands slightly closer together makes it harder and works your triceps more.

All About Decline Push-Ups

If incline push-ups raise the level of your head and hands when you perform the exercise, decline push-ups lower it. You form a declining angle from your feet to your head, by putting your feet on a higher surface. 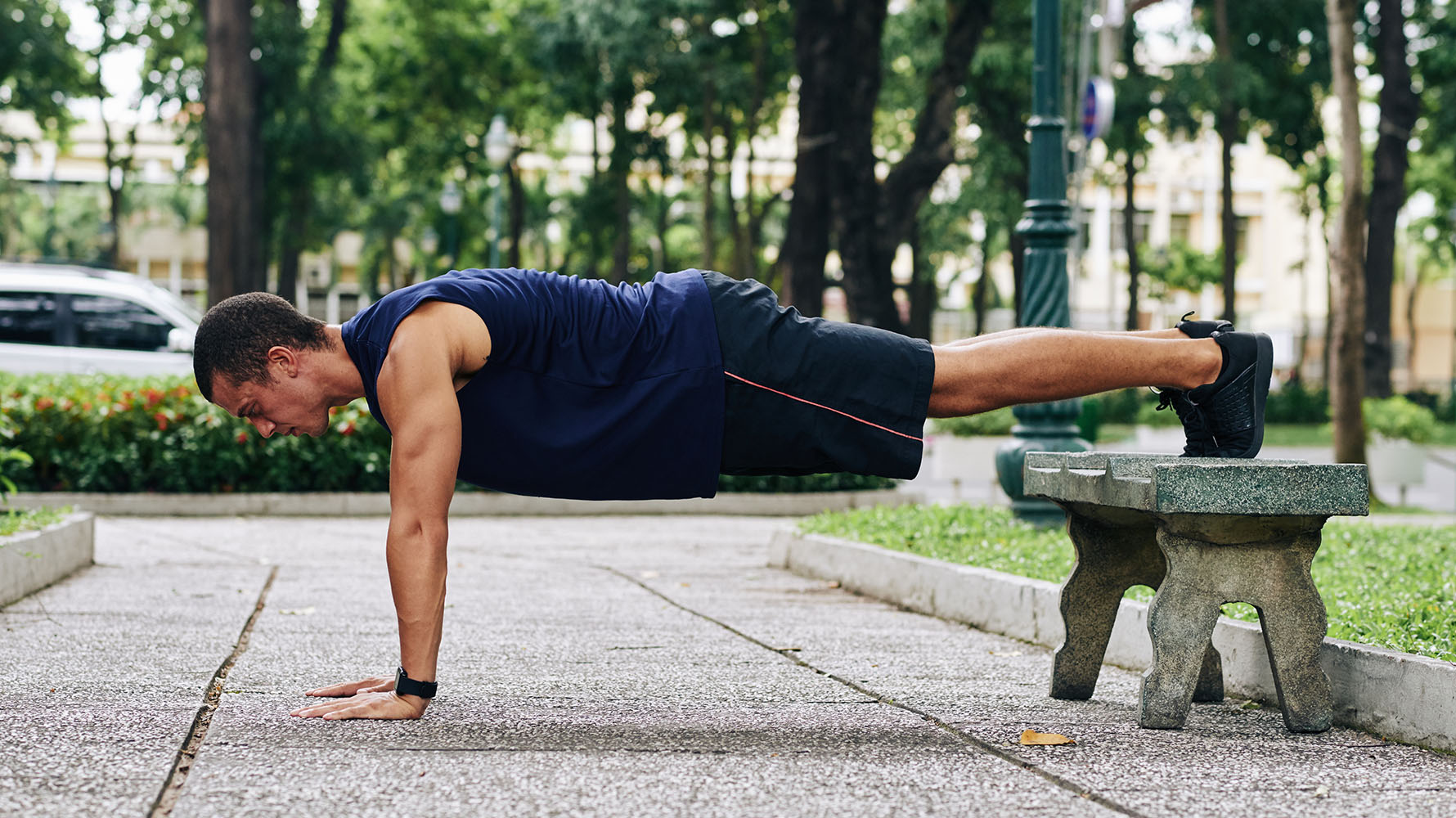 There are two options for doing this: a stable surface or an unstable surface. Unlike with an incline push-up, where instability can result in a painful face-plant, decline push-ups only risk banging up your toes if you slip.

Stable surfaces to raise your feet are objects like exercise boxes, stairs, retaining walls, or chairs. Unstable surfaces are objects like yoga balls. It’s up to you what you want to use. You’re typically looking for something between 10 and 25″ high, though higher raised surfaces can make it more difficult to properly perform the exercise.

Where regular push-ups work your core, arms, and shoulders, and incline push-ups will work more of your chest, decline push-ups work more of your arms and core. It’s more difficult to keep your core straight, and you will need to keep your abs, back, and glutes tight while performing the exercise. Additionally, you’ll get more focus on your arms and shoulders with this variation of the workout.

One of the most common mistakes people make with decline push-ups is looking “up” while performing the exercise. The temptation is to straighten your gaze, but that twists your neck at an awkward angle. You want to keep your neck straight, so you’re looking down in relation to your body’s angle. It can feel weird and uncomfortable at first, but you’ll get used to it.

Modifying decline push-ups has the same range of options as modifying other push-ups. You can add weight to make it harder, though you need to make sure it’s firmly in place and won’t slip towards your head on the downward motion. You can use one arm or one leg to make it harder. Using a balance ball forces you to work your core to an additional extent to keep yourself stable. You can also do knee tap push-ups, where you bring one knee up and tap it with your elbow at the peak of each rep.

Which Form of Push-Up is The Best?

With three primary forms of push-ups to choose from, which one is the best?

The answer, of course, is “it depends”. All forms of push-ups are good for working your upper body in general, but the modifications you make can help them focus on specific muscle groups.

You can also get into a routine of switching between each kind of push-up every day. Do inclines one day, flat push-ups the next day, then declines the following day, then back to flat the next day, in rotation. The sequence can help keep your muscles shifting and working in different ways and pushes off the plateau you may reach.

Other Forms of Push-Up

In addition to simply raising or lowering the angle of your body, there are a bunch of other kinds of push-ups you can try. Here are a few examples: 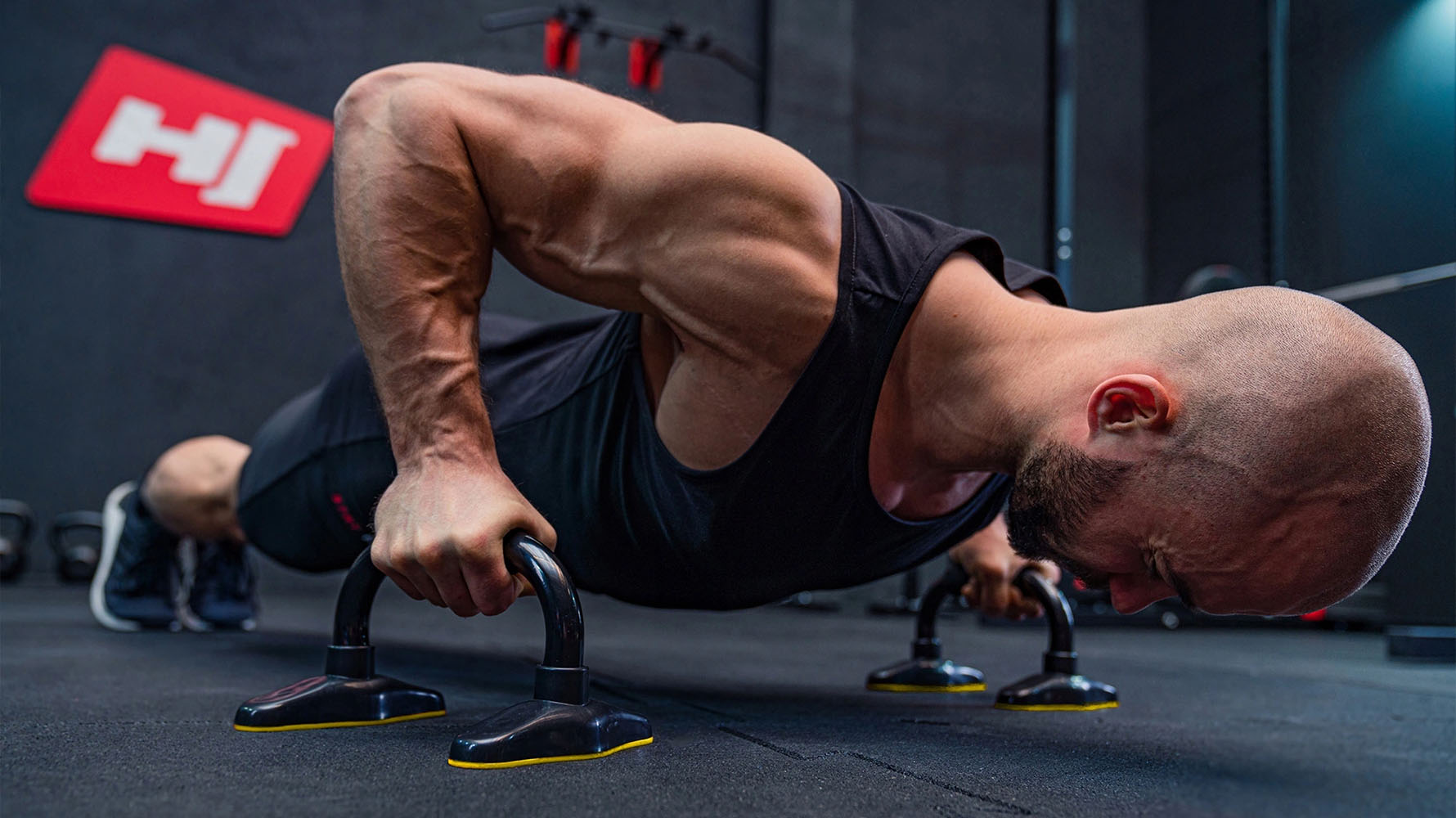 Adding any of the other modifiers, like weights, resistance bands, a cap, a knee tap, or elevation can make any of these push-up forms more beneficial or targeted more towards other muscle groups. You can tailor a push-up to your specific needs quite easily.

Are There Risks to Push-Ups?

Almost every risk to push-ups has to do with improper form. Maintaining proper form is absolutely necessary to get the most out of the exercise and avoid injury.

The most common mistake people make is moving their head. You want your neck to be in line with your spine, so don’t look up, down, or to the side while doing push-ups. Doing so will result in neck pain very quickly.

Letting your hips sag, arching your back, or otherwise putting your core out of balance will also lead to pain or injury. A saggy core means lower back pain and less effective push-ups while an arched back can lead to upper back pain as well.

Finally, if you try to use additional weights, you risk hurting yourself with those weights themselves. Free weights balanced on the back can slip and slide, resistance bands can snap, and weights combined with incline or decline push-ups can fall and injure you. A weight vest is generally the best kind of weight to use to avoid this problem.

Doing push-ups every day, or working them into your overall exercise routine, can do a lot to build up your core and your chest. In particular, they’re an excellent exercise for your triceps, pectorals, and abdominal muscle groups. Just be sure to be safe, practice your form, and push yourself as necessary to reach your goals.