Exercises Standing Calf Raise Machine: How To Use, Benefits and Muscles Worked
Thanks for subscribing!
August 18, 2020 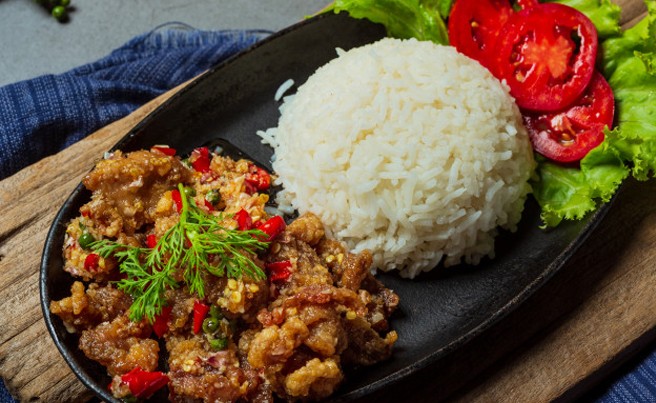 There’s a whole lot more to rice than just the white stuff you get out of a red box and make in a minute. Rice grains are actually the seeds of a certain kind of grass. There are a lot of different varieties of these grasses, with origins in Africa and Asia, though by now rice has spread around the world.

Rice makes up more than a fifth of all calories consumed by humans worldwide. It’s extremely prolific, and it stands to reason that you’d turn to it when you’re looking for calories as part of a bodybuilding diet plan.

There are three main categories of rice, based on their origin. Asian rice comes in two forms, the Indica rice, and japonica rice subspecies. African rice, the Oryza Glaberrima variety is the second. The third is “wild rice”, from the Zizania genus. Amongst those categories, there are tens of thousands of different varieties, cultivars, and sub-species. There are so many that even the Wikipedia article on rice varieties barely does more than list their names. 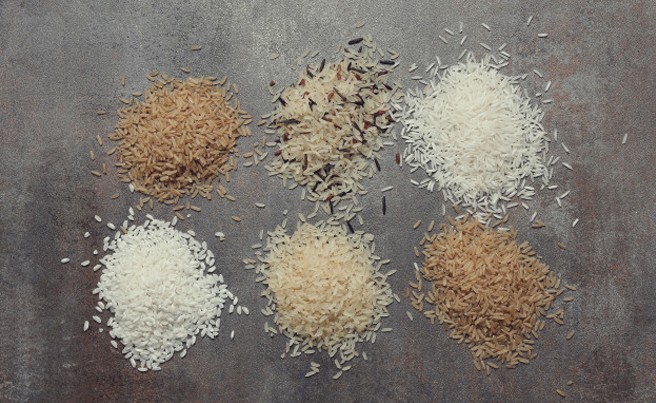 Obviously, we don’t have the time or the space to dig into all of these different forms of rice, so we’re going to limit ourselves to talking about two specific kinds of rice: basmati and brown.

So, what are these kinds of rice, and which is better for your bodybuilding diet?

Basmati is a kind of white rice but isn’t the same as the standard white rice you see marketed as such. It can also be brown, which doesn’t help the confusion any. It’s a subspecies of the indica form of Asian rice and is generally grown in the Pakistan, India, and Himalayan regions. It’s exceedingly common in India, which produces two-thirds of the basmati rice consumed around the world. 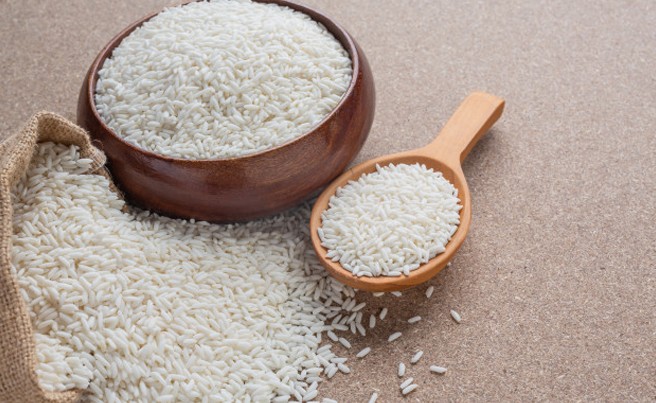 Basmati is long-grain rice, and it’s characterized by a unique, nutty flavor and an almost floral aroma. When cooked, it’s thick and fluffy, with less starch than other types of rice. It’s not sticky rice, especially compared to one of the regionally common long white rice, jasmine rice.

Within basmati, you can find both white and brown varieties. The brown version of the rice tends to be stiffer and harder and requires a longer cooking time than its white brethren. It’s also higher in fiber and has a more pronounced, nuttier flavor.

One cup of basmati rice will have around 210 calories and zero fat. It’s about 17 percent of your recommended daily carbohydrates, and it includes five grams of protein. It’s high in fiber as well. The brown basmati is even higher in fiber, with a single cup containing as much as 28 percent of your daily intake.

As you might imagine from reading some of the above, “brown rice” is not a very accurate descriptor. There are, quite literally, thousands of different kinds of rice that can be considered to be brown rice. Which version of brown rice you get depends a lot on the brand, the region of the world you’re in, and even the preferences of the source. 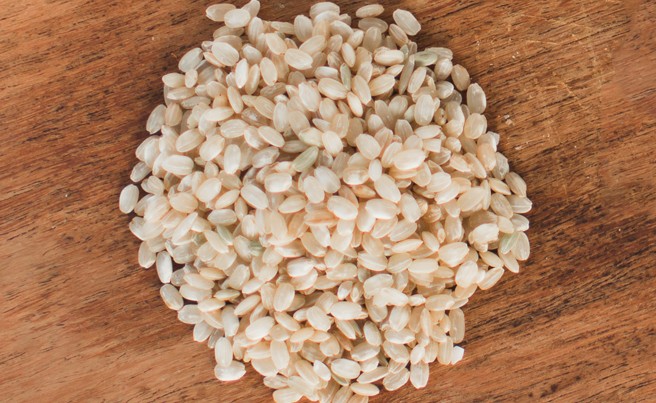 A cup of brown rice is similar to a cup of basmati rice, since they’re similar plants, and one of the main differences is processing. The added bran in brown rice means it has more fiber than white rice, and it has some fat in the rice as well.

One way to compare basmati rice and brown rice is to look at their nutrition facts side by side. 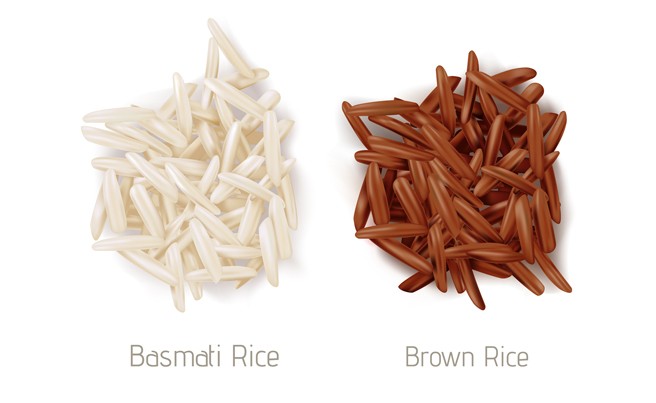 Many of the nutrients will be very similar, though there are a few key differences.

It’s worth making a point here, though, that a lot of this depends on the exact specific variety of brown rice you’re getting, and can vary even within the same species if the rice was grown in different locations or harvested at different points in the season. Some methods of processing can even fortify or purify the rice, to add or remove various minerals. You should look at the specific nutritional facts for the brand and variety of rice you’re buying rather than go by this guide on its own.

Arguments in Favor of Brown Rice

There are a few arguments to be made in favor of brown rice as your primary dietary rice. Whether you’re working out, focusing on bodybuilding, or just including rice as part of an overall healthier diet, brown rice can bring some solid benefits to the table.

As whole grain rice, the bran is left on the rice itself. Whole grains take longer to digest and include more insoluble fiber, which helps with gut health. This combination means you’ll eat less rice to feel full, feel full for longer than with regular white rice, and will get more nutrition out of the rice.

White rice also has the problem where not just the hull of the rice is removed, but the bran and the germ are removed as well. This leaves a filling source of calories, but there’s one problem: the germ is where most of the beneficial nutrients are stored. White rice is more nutritionally “empty” in a bad way; it fills you up, messes with your blood sugar, and fails to give you any nutritional value in return.

Arguments in Favor of Basmati Rice

The difference here is that basmati rice is not white rice. Basmati rice has the hull and bran removed, yes, but the germ is still in place. Your typical basmati rice still has all of that good nutritional value, but with less to get in the way.

A lot of athletes and bodybuilders swear by basmati as the best variety of white rice to use as part of a bodybuilding or workout diet. 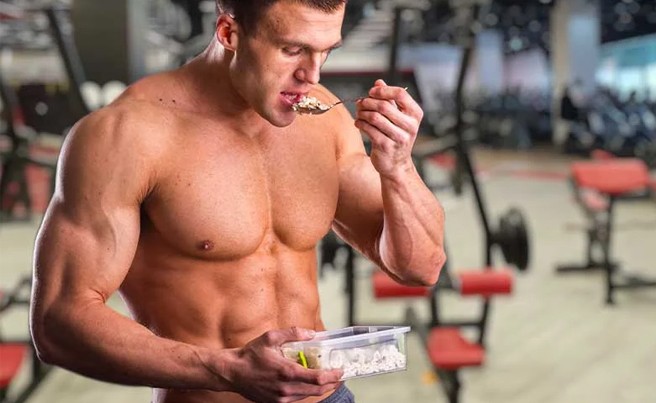 The biggest benefit of basmati rice is actually the lack of bran. The bran slows down digestion, but with basmati rice, you want to digest it as quickly as possible, to refuel your muscles and give them the nutrients they need to recover and heal after a workout. This makes basmati rice the best rice – at least between these two – to eat as a post-workout meal base.

Another interesting component is that a study performed at the university in Osaka, Japan found that brown rice contains more antinutrients, which are compounds present in foods that inhibit the absorption of other nutrients. Brown rice contains more of these, such as phytic acid, which inhibits your ability to absorb zinc, iron, calcium, and magnesium. Thus, while brown rice might have more of some of these nutrients, your body actually absorbs less of them with each cup of rice you eat.

The glycemic index is a measurement of how quickly your body takes carbohydrates from a given source and converts them into blood sugar. A higher glycemic index means the food item is converted into blood sugar more quickly, which leads to higher energy levels and spikes in energy, but also potential crashes. A lower glycemic index is less harsh on the body and is overall better for you, but may also linger in your system for longer. In general, low GI foods are better, though there’s always a space for high GI foods in a workout plan for use as fuel. 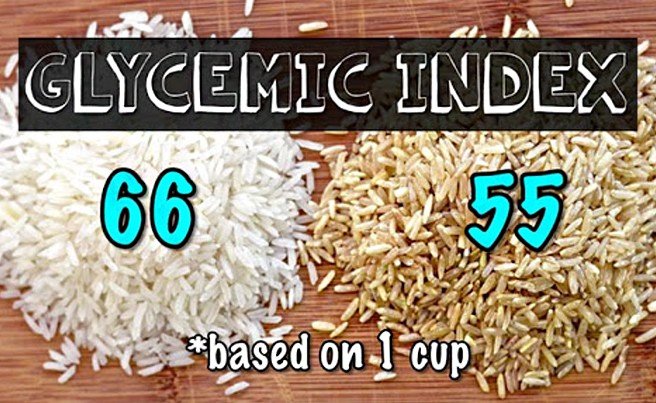 Basmati rice is among the lowest glycemic index versions of rice, with a low range on the GI scale. Brown rice is higher on the scale, meaning it can give you more energy faster but will taper off faster as well.

The Matter of Arsenic

One concern some people have with adding rice to their diet is that of arsenic. Arsenic is a natural element and a metallic mineral, and it’s found naturally around the world. It’s in the dirt, it’s in the air, it’s in the water, and everywhere else. It’s used by humans in some kinds of pesticides and fertilizers, but it’s also toxic to humans. Arsenic poisoning is dangerous.

While this is technically true, and indeed people with high-rice diets do tend to have more arsenic in their bodies than people with low-rice diets, is it really worth worrying about?

The fact is, while you’ll have more arsenic in your diet if you eat more rice, you can minimize this in a few ways.

Additionally, you can go with basmati rice, which has the lowest amount of arsenic of all rice naturally.

So, as a final verdict, which should you go with? Is basmati rice healthier and better for you when you’re bodybuilding, or should you go for the brown rice?

The real answer is, it doesn’t really matter. There are differences between them, but those differences are largely minimal. If you’re particularly worried about arsenic, or you’re worried about getting more fiber, basmati rice is probably the better option. If you’re tired of bland white rice and want something with more flavor to it, brown rice is the way to go. And, of course, you can always mix and match. Go with white rice after workouts and brown rice as part of meals, and customize your diet to fit your needs. It’s entirely up to you and what rice varieties you have available to you.